Hainan ... The Hawaii of China

Hainan
Located in the southernmost of China, Hainan Province is China’s second largest island, second only to Taiwan. Because of Hainan’s position on the northern edge of the tropical zone, it has a monsoon climate, characterized by long summers, that has earned it the nickname “big natural greenhouse”.   -

Hainan is considered to be a trapical island located on the South China Seas. Temperatures reaching 25 oC to 30 oC in July and August, with golden sandy beaches and coconut tree surroundings. Offering sunbathing, sea sports, Roman Style hot spring paradise, sailing and diving. The island offers numerous beaches such as Sanya Bay is located on southern coast of Hainan Island within the Hainan Province it is one of the five major bays in Sanya, with 22km of sandy golden beaches. Yalong Bay – “The Oriental Hawaii” is claimed to be the best beach in China. The sea is blue and the sand is soft, extending 7.5 kilometres.

Hainan has numerous Golf courses with Misson Hills in Haikou, which is one of the largest golf complexes in the world. China has over 500 Golf courses with the world’s biggest at Mission Hill in Hainan and a twelve course 18-hole course in Shenzhen. Other Golf Courses in this area includes Shenzhen Tycoon, Hong Kong, Long Island and Fenghuangshan are just some Golf Courses. With excellent weather and reasonable priced hotels … this is the Golfing Holiday for enthusiast. 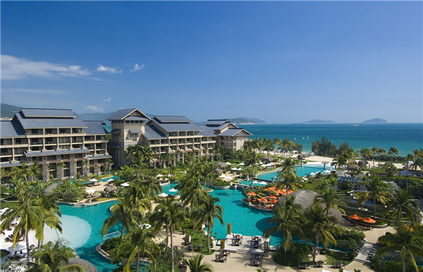 The hotel is situated in the Yalong Bay national resort district on the southern-most tip of Hainan Island off the coast of mainland China. Restaurants and bars can be found in the immediate vicinity. Nanshan Buddhist Cultural Park, Tianya-Haijiao and the Pearl Culture Centre can all be reached easily on public transport. This resort hotel features 501 rooms in total and offers modern and spacious southern-Chinese-style rooms and suites. Guests at the hotel may avail of the gym and the 9 swimming pools. The spa offers a hot tub, sauna, solarium, steam room, as well as a variety of massage and spa treatments. Activity and entertainment programmes for both young and old feature. Breakfast is served as a buffet, while lunch and dinner are available either à la carte or from a set menu. For a truly wonderful stay in an idyllic setting, stay at this resort hotel. 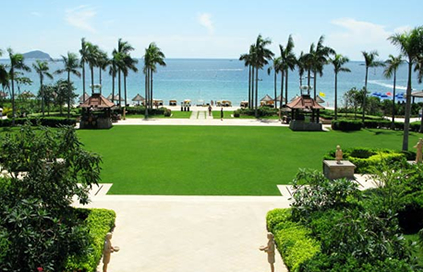 From May 2018 Flights Frm London

Nestled on a pristine sweeping 7 km crescent of white sand beach cupped by rainforest covered mountains and caressed by calm and crystal-clear waters, the resort’s 452 rooms offer commanding views of the famous Yalong Bay. The direct access beach is complimented by a 10 hectare tropical garden perfect for peaceful walks in the sea breeze. Once in a lifetime memories happen at the elegant Ocean Front Wedding Chapel while the resort also offers numerous dynamic activities for families.