Indonesia is located south east surround by the South China Seas and Indian Ocean, consisting of number of large Islands. It is the world’s largest Island country with more than seventeen thousand islands.

The country has 34 provinces with its capital is Jakarta situated on the south west island. The major island in Indonesia are Greater Sunda Islands. Borneo - divided between Indonesian Kalimantan, Brunei, and Malaysia's states of Sabah and Sarawak. Java, formerly Jawa Dwipa. Sumatra, formerly Swarna Dwipa.

Lake Toba is on the Island of Sumatra is a volcanic lake measuring 100 kilometres long and 30 kilometres wide. This lake was formed 70,000 years ago by a massive volcanic eruption.

The Tanjung Putting national park is located on the island of Borneo, being popular as a ecotourism destination with a abundance of wildlife including gibbons, macaques, clouded leopards, Sun Bears, pythons, crocodiles and orang-utans.

Gunung Bromo is an active volcano and part of the Tengger massif, in East Java. At 2,329 meters (7,641 feet) it is not the highest peak of the massif, but it is the most well known. The area is one of the most visited tourist attractions in Indonesia and Java.

Located at the north of the island of Sulawesi, Bunaken is one of Indonesia’s most famous dive and snorkeling areas. The island is part of the Bunaken Marine Park where you can see more than 70% of all fish species that live in the western Pacific ocean.

Lombok’s most popular tourist destination, the Gili Islands are an archipelago of three small islands: Gili Trawangan, Gili Meno and Gili Air. The islands are very relaxed and laid-back, with countless little beachside cafes still playing reggae and no cars or motorbikes to disturb the peace.

The above are just some of the many attractions in Indonesia, its well known as a tropical paradise. 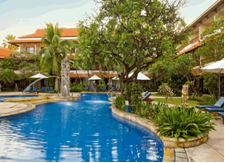 Set in tropical gardens complete with pretty landscaped swimming pool and spacious sun terrace, this lovely hotel offers great value for money and is the ideal base for your stay in Kuta. Bright and contemporary guest rooms have been recently renovated and the Family Rooms can comfortably sleep up to four people. The hotel has two restaurants serving both Asian and International cuisine and just a couple of minutes walk away you will find a large shopping mall, a variety of restaurants and a waterpark. 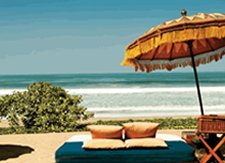 Designed in the style of a Balinese village, The Oberoi Bali offers luxurious accommodation in a truly private setting with charming thatched roof villas, private pools, and unique garden bathrooms all set in 15 acres of tropical gardens on Seminyak Beach. A short walk away you will find fashionable beach clubs, boutique shops and a huge variety of restaurants..

One of Bali’s more upmarket resorts, busy Seminyak is packed with luxury accommodation, trendy bars and restaurants and boutique shops. The resort has developed rapidly in recent years and now almost merges with some of the nearby villages. In fact, development is still taking place today and new boutiques and bars are constantly popping up. By day, life revolves around the beach. This is an excellent spot for surfing, so it is important to note that the sea here is not ideal for swimming. However, all of the hotels we sell in this area have excellent swimming pools. If you’re looking for boutique shops, fine dining, breathtaking sunsets and fun nightlife, Seminyak is the ideal place for you.

Min 2 Per Persons From