Located in the Yangtze River Delta in East China, is the largest and richest city of China. With fascinating mix of East and West, Shanghai is reputed as the “Pearl of the Orient” and the “Paris of the East”. For the fantastic location, Shanghai is always served as a popular gateway to China and is the must-visit destination for anyone who comes to China.

Some most popular attractions in Shanghai are: The Bund, “a gallery of international architectures”, is the landmark of Shanghai, Nanjing Road is Shanghai’s foremost shopping street and is one of the world’s busiest shopping streets. Shanghai World Financial Center in the key CBD is a new and vital landmark in Shanghai, Shanghai Museum is not only the cultural landmark, Standing at the bend of the Huangpu River, the Oriental Pearl TV Tower soars 468 meters, setting the character of the new urban area as well as its cityscape, Shanghai Urban Planning Exhibition Center is a must-see to witness how Shanghai became a cosmopolitan city from a shabby fishing village, The Jinmao Tower is situated in the heart of Lujiazui Finance and Trade Zone in Pudong New Area, Jade Buddha Temple shows itself in the center of Shanghai city. With a history of more than 1,500 years, Fengjing is the only township in Shanghai on the list of Historic, Just Completed in 2016, Shanghai Tower of 632 m high is at present the tallest skyscraper in China and proudly the second tallest one in the entire world, Shanghai Circus is referred as the No. 1 Circus World in China are just some of the many attractions in Shanghai.

Shanghai is popular for shopping, night life, restaurants and skyscrapers. It’s one of the main financial centres of China, together with Hong Kong 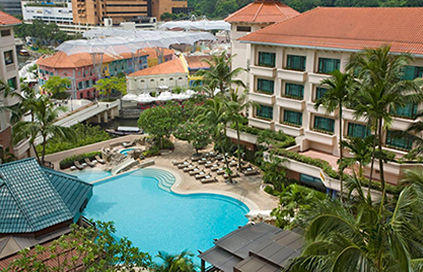 From May 2018, Four Star Hotel, Room & Breakfast, Flights from London

Swissotel Merchant Court, Singapore is a luxury hotel ideally located by Clarke Quay, within walking distance of the financial hub of Raffles Place, and close to major places of interest including Chinatown, and the numerous bars and restaurants on the famous Clarke Quay and Boat Quay. This colonial-style hotel sits in the shadow of modern skyscrapers and is in an excellent location, just a short walk from the riverside entertainment destination Clarke Quay.

Per person, Min Two Persons,Prices from

From May 2018, Four Star Hotel, Room & Breakfast, Flights from London

Set amidst 15 acres of lush greenery, Shangri-La Hotel, Singapore, is a place like no other. Consistently voted as one of the best hotels in the world, this is where the legendary Asian hospitality of Shangri-La began. The story continues with you. With luxurious guestrooms and suites in three distinctive wings, and serviced apartments and residences in four-storey villas, this place is where you will find your own Shangri-La. You will be welcomed to luxuriate in the acres of wonderfully landscaped gardens, relax poolside or pamper yourself at Singapore's first CHI, The Spa. As night falls, create the evening you desire with dinner at The Waterfall, The Line, or Shang Palace

Per person, Min Two Persons,Prices from