Beijing is one of the four ancient cities of China (together with Xian, Luoyang, Nanjing), the best preserved, and famous around the world. The city is also known as a cradle of humanity. As early as 700,000 years ago, Peking Man lived in Zhoukoudian area of this city.

The city and its surrounding areas offers many attractions such as:  The Great Wall, Tiananmen Square, Forbidden City, Summer Palace, National Stadium, Temple of Heaven, Ming Thombs, Beijing Zoo, Hutongs, Yonghe Lamasery are just some of the interesting attractions.

China holidays tell a tale of two countries – one is an ancient kingdom embedded in the past, the other an electrifying age of change. Beijing’s Imperial City is a trove of ancient treasures, with the Forbidden City and Tiananmen Square echoing with history. Xian is home to the outstanding Terracotta Warriors which were discovered in 1974 by a group of farmers who were digging a well. These are just some of the many landmarks in this colourful history book that are a must-see. The Temple of Heaven was the place were emperors of the Ming and Qing Dynasties held the Heaven Worship Ceremony. It is the largest existing masterpiece of China’s ancient sacrificial buildings. See the various prayer halls and the altars the emperors would offer sacrifices on during the day of Winter Solstice. he Forbidden City is one of China's three ancient palaces and is the most popular tourist attraction in the country with 9,999 rooms and chambers for you to discover. It is twice the size of the Vatican and three times the size of the Kremlin at 720,000 square metres. The best times to visit are spring and autumn when the weather is at its most pleasant. You will also visit the Great Wall of China 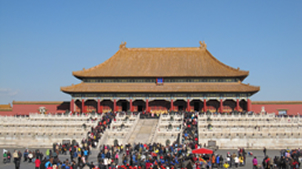 Stay at the luxurious Regent Hotel and enjoy what this exciting city has to offer in true style. Apart from visiting the traditional sites of Forbidden City and Great Wall, you will have the opportunity to explore the historic district of Hutong by rickshaw, tour the Olympic park and join in a tai-chi class. Beijing (6 nights) Tiananmen Square. Forbidden City. Temple of Heaven. Tai-chi course. Artist Quarter 798. Hutong rickshaw tour. Hot-pot dinner. Olympic Park. Ming Tombs. Great Wall at Mutianyu. Summer Palace. Lama Temple.

Buy Now about Beijing in Style